MINISTERIAL CANDIDATE JERNEJ VRTOVEC: I HAVE ALREADY FOUGHT AGAINST LOBBIES AS MEMBER OF PARLIAMENT AND I WILL DO THE SAME AS MINISTER 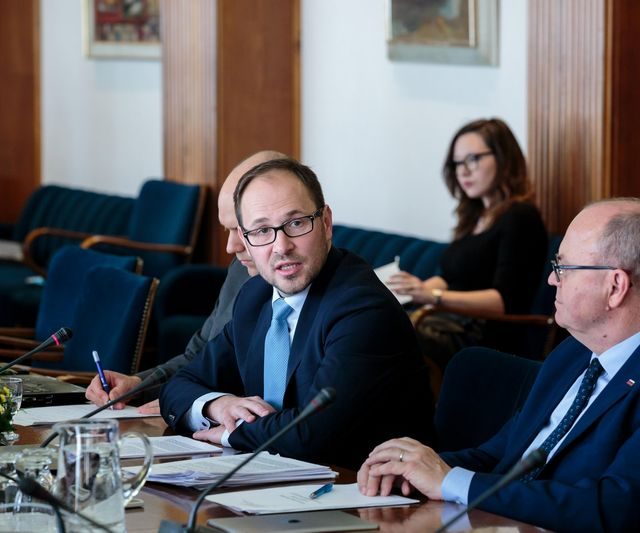 “My motto will be: User-friendly infrastructure. I want to bring infrastructure closer to people and make it accessible and useful. This is what our people deserve, no matter where they live,” said ministerial candidate Jernej Vrtovec at a hearing at the Committee on the Environment and Infrastructure.

He said he takes politics as a mission to try to do something good for the society. “It is my duty. That is why I did not shirk responsibility, and despite a very demanding department accepted the proposal to become the new Minister of Infrastructure. At the ministry, I want to accelerate existing investments in infrastructure and add new infrastructure investments to them. Public transport must be attractive and affordable, and we need to accelerate the modernization of railway infrastructure,” said the future minister.

We need to fulfil the Green Deal

He announced that he would place great emphasis on the Green Deal. “The process of decarburization touches everyone. We do this because it is essential if we want to preserve our planet, because we owe it to ourselves and our children. We must therefore fulfil the Green Deal, but not in a way that degrades the standard of people,” he said, adding:

“We have set high goals for key policies that aim to ambitiously reduce traffic emissions and move one step closer to a green future. We will promote sustainable modes of mobility. If we want people to actually use electric cars, then we have to adapt infrastructure in particular. We need to take this a step further.”

To accelerate modernization and new construction of railway infrastructure

He and his team set two goals: infrastructure and transport services according to the needs of users and the development of transport services with an emphasis on reducing various pollutants. “One of my priorities will be the improvement and renewal of railway infrastructure. We must accelerate the modernization and new construction of railway infrastructure, increase investment in improving public passenger transport infrastructure and reduce congestion. It will be a priority to create conditions for more people to choose to travel by train, rather than by car, to travel cheaper and faster. We owe it to them,” emphasized Jernej Vrtovec, adding that it is necessary to ensure conditions for more users migrating to Ljubljana daily to use the railway. Therefore, the ministry will increase the frequency of trains in all directions and increase the throughput of the Ljubljana station and of the connecting lines.

Works on highways will be done at night, we will introduce e-vignettes

The focus will not be on the rail system only, but also on roads where, in his opinion, it is necessary to improve the condition of roadways. The preparation and implementation of projects will follow the principle of economy.

One of the biggest challenges linked to highways will be to improve highway throughput. “That is why more works on the highways will be done at night to ensure that they are completed sooner. As a result, there will be less congestion and less environmental burden,” the NSi’s MP announced.

He also announced an introduction of e-vignettes. “Everyone will be able to buy it through a mobile application by entering a car registration number. This will save enough money to reduce the vignette price. If it works in the neighbouring countries, then it will have to work for us as well,” he was clear.

He assured that the construction of the 3rd development axis (South – North connection) would significantly contribute to harmonious regional development. »Building the third development axis is a priority. Slovenia is a country that is rich enough to enable people from Koroška and Bela krajina to have normal mobility. While work is underway, we can consider another option if it is cheaper and more acceptable to the environment and the population. But not to the detriment of the time course of construction,” emphasized Jernej Vrtovec.

He is also convinced that the construction of the second track must be continued. “But I emphasize, we should build smart because it is our money. We are not building the second track for lobbies and networks, but for citizens!” were clear words of the future minister.

I will not let money disappear

He also advocated that the Slovenian energy sector should be smart, green, safe, self-sufficient and competitive. Therefore, drawing up action plans for the development of electricity networks, e-mobility, use of alternative heating sources, renewable energy sources and energy storage will be crucial.

Finally, he added that he would be naive if he claimed that there were no lobbies. “They exist! But I have been fighting them as the Chairman of the Commission of Inquiry for investigating abuses and uneconomical practices in the BAMC and I intend to do the same in the Ministry of Infrastructure,” he stressed, adding: “Every euro that disappears unjustified into the private pockets of individuals means worse roads, worse railways, lower traffic safety, more expensive energy projects. I will not tolerate this as a minister!”

This website uses cookies to improve your experience while you navigate through the website. Out of these, the cookies that are categorized as necessary are stored on your browser as they are essential for the working of basic functionalities of the website. We also use third-party cookies that help us analyze and understand how you use this website. These cookies will be stored in your browser only with your consent. You also have the option to opt-out of these cookies. But opting out of some of these cookies may affect your browsing experience.
SAVE & ACCEPT